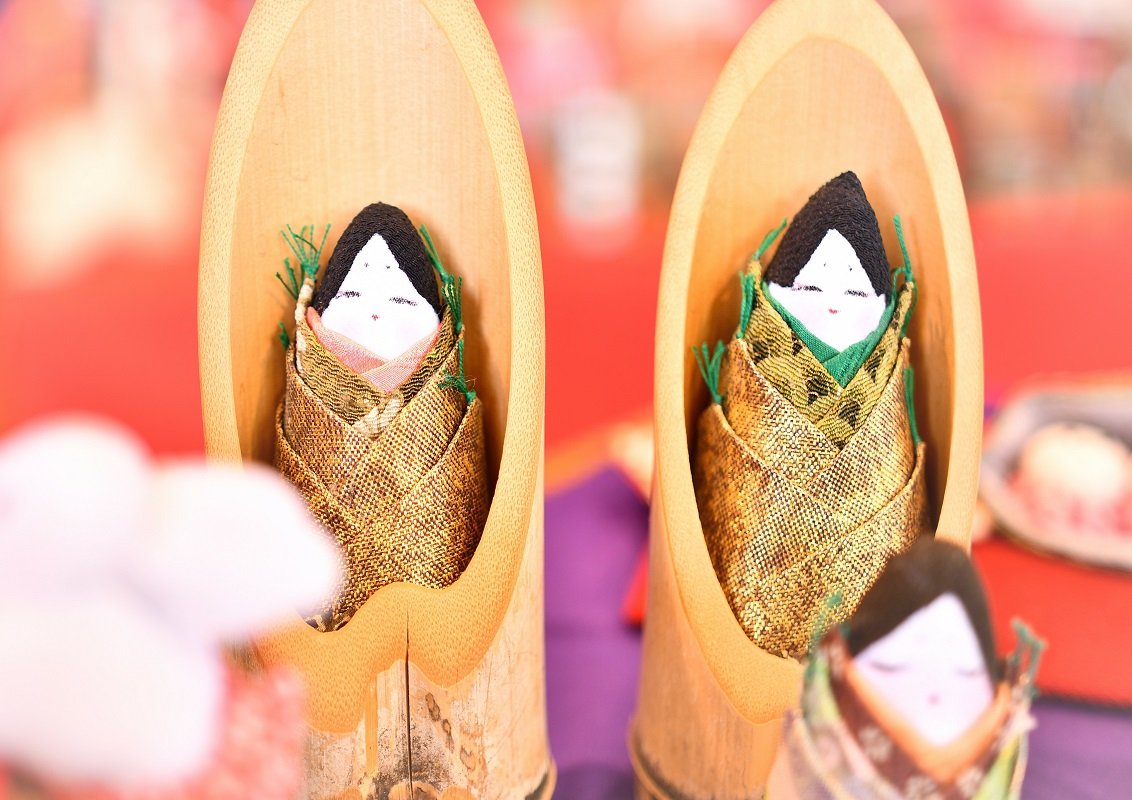 “かぐや姫” (Kaguya Hime) is a story of a beautiful woman who returns to the moon.

Once upon a time, when an old man was cutting bamboo in a mountain, he found a shining bamboo. When the old man cut the bamboo wondering, he saw a little girl in it. Surprised, the old man took the girl home and named her “かぐや姫” (Kaguya Hime) and raised her with care.

After bringing Kaguya Hime home, the old man found shining bamboo every time he went to the mountain, and when he cut the shining bamboo, a large amount of money came out from inside. The old man and his wife quickly became very rich. And strangely, in only three months she grew up to be a very beautiful woman. Then many men heard the rumor and proposed marriage to Kaguya Hime. However, she refused the proposal by offering difficult conditions to any men. she deliberately conveyed impossible conditions, such as “bringing five colored jewels hanging from the dragon's neck,” and induced the men to give up their marriage. Some men tried to deceive her with fake treasures, but Kaguya Hime found them out and turned her down.

The old man and his wife wanted to protect Kaguya Hime, whom they had brought up with great care, and on the day of the full moon they hired Japanese warriors, “侍” (samurai), to protect her. However, when the envoys from the moon came, all the samurais could not move and could not protect Kaguya Hime. She said goodbye to the old man and his wife in tears and gave them a medicine that would make them immortal if they took it as a token of her gratitude.

Mt. Fuji is famous as the highest mountain in Japan, but many people don't know that the story of a princess who came from the moon may have something to do with the origin of Mt. Fuji.

“桃太郎” (Momotarō) is a story that a boy born from a peach kills ogres.

Once upon a time there lived an old man and his wife. One day, when she was washing clothes in the river, a big peach came floating from the upper stream of the river. Surprised, the old woman took the peach home and tried to eat it with him. But when he cut the peach, he saw a lively boy inside. They named him “桃太郎” (Momotarō).

When Momotarō grew up and became a fine young man, many villages suffered from 鬼 (oni) who robbed them of their food and treasures. Then Momotarō said he would exterminate the ogres that tormented the villagers. The old man and his wife supported Momotarō and prepared for his trip. The old woman gave Momotarō “きびだんご” (kibi dango), dumplings made from grain.

When Momotarō was heading to the island where the ogres lived, a dog appeared. Momotarō said, “I'll give you a kibi dango, so I want you to join me,” and the dog accepted. In the same way, a monkey and a pheasant appeared, so Momotarō made them his friends.

Momotarō and his friends arrived at “鬼ヶ島” (Oni ga shima), where the ogres live, and they cooperated in exterminating the ogres. And the villagers recovered the food and treasure they had been robbed of. Momotarō was thanked by the villagers and returned home. And he lived happily with the old man and his wife.

The dog, monkey, and pheasant that “桃太郎” (Momotarō) made his friends each had different strengths. Momotarō used the strengths of his friends to defeat the ogres. Perhaps there is a lesson in this story: When people who are good at what they do get together, they make a strong team.

“浦島太郎” (Urashima Taro) is a story of a man who saved a turtle and repaid his kindness.

Once upon a time there lived a young fisherman named “浦島太郎” (Urashima Taro). One day, Urashima Taro saw children bullying a turtle at the beach, so he helped it. Then, as a token of gratitude, the turtle took Urashima Taro to a gorgeous castle called “竜宮城” (Ryūgūjō) in the sea. Urashima Taro was appreciated by “乙姫” (Otohime), a princess who lived in the castle, and was treated to a splendid dinner. Urashima Taro was so much fun that he forgot about his family and life as a fisherman on the ground and was absorbed in the luxurious life in the castle.

However, a few days had passed since he came to the castle, and Urashima Taro began to worry about his mother he had left behind on the ground, so he decided to return to his old world. Otohime saddly gave Urashima Taro a mysterious box called a “玉手箱” (tamatebako) saying, “Open it if you have any trouble.”

Urashima Taro, who saved the turtle, was a good person, but he forgot about his precious family and spend all of his time on amusement at the castle. There's a lesson to be learned: Don't forget what you care about.

“かちかち山” (Kachikachi-yama) is a story of a rabbit getting revenge on a raccoon dog who tormented the old man and his wife.

The old man mourned and lived in tears for days. When the rabbit saw this, it sympathized with him and said to him, “I'll avenge your wife’s death.” The rabbit asked the raccoon dog to help him pick up firewood, and the rabbit put a lot of firewood on the raccoon dog’s back. Then the rabbit secretly set fire to the firewood the raccoon dog carried on his back, and burned him badly. To the raccoon dog, who had been seriously injured, the rabbit gave a medicine that mixed miso and red peppers to make it more painful as a “burn medicine,” and furthermore tormented him.

Some people say that they are afraid of the rabbit that completely avenges the raccoon dog who tormented the old man and his wife, but perhaps the rabbit could not forgive the raccoon for making the old man and his wife so sad that he took a cruel revenge. In Japan, there is a saying called “因果応報” (ingaōhō), which means that what you do will eventually come back to you. “かちかち山” (Kachikachi-yama) may be a lesson that if you do something wrong, you will eventually suffer the same fate.

We introduced some famous old stories in Japan. Do you have any favorite stories? There are many other folktales in Japan. Maybe some of them are similar to old stories in your country. If you are interested, please read other old Japanese stories.

Why don't you sign up for a free membership to Human Academy Japanese Language School Plus? You can experience practical Japanese lessons by experienced teachers for free.